Menu
How Do You Determine Which Repair Parts are Critical?

How Do You Determine Which Repair Parts are Critical?

No data was found

There are several elements involved in determining the status of repair parts in a Maintenance, Repair and Operations (MRO) supplies inventory. Some of these parts are essential to the operation of production equipment in a manufacturing plant and other parts do not have such a severe impact on the process. To determine what parts need to be held on site as critical or insurance spares, a criticality analysis of the maintainable assets is conducted to rank the probability of impact on the production process or employee safety if the equipment were to fail. In many instances the criticality analysis reveals that the probable failure of the equipment under review would have a direct impact on employee safety, environment or the ability of the production process to run effectively. When spare parts and equipment assemblies are identified as critical, the second phase of the decision process begins.

A cross-functional team composed of employees from Operations, Maintenance, Engineering, Materials Management and Safety conducts the first phase of a criticality analysis. The analysis looks at the impact equipment failure would have on customer orders, time to production disruption, employee safety, environment, the ability to isolate the failed equipment, equipment history of Mean-Time-Between-Failures (MTBF), PM/PdM history and the overall predictability of failure. Each of these factors are reviewed and given a weighted score between zero and 100 that converts into a part criticality ranking as shown in the criticality index below. 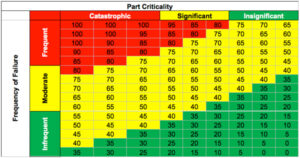 The second phase of the criticality analysis is to determine if the item will be held on site as a part of the MRO inventory or designated as a non-stock, order on demand critical spare. Parts held in the MRO inventory are an investment to ensure production is not interrupted and safety of the employees and environment are not compromised. These parts that are purchased and held as part of the inventory have an ongoing cost associated with their management. A typical item held in inventory, whether critical or non-critical, has a handling or annual carrying cost of 17 to 25% of the cost of the item in the average MRO inventory. In five years the associated carrying cost has doubled the expense of the spare part and if the item is a rotating spare that has not been under a preventive maintenance program, the part could fail when put in service or not provide for the expected service life of a new part.

A risk analysis that evaluates the lead time from the time the order is placed with the supplier until receipt of the item on site is also a factor that affects the decision to stock the part as part of the inventory. The reliability of the supplier to meet the expected lead time for the part should also be a part of the risk analysis. Suppliers providing critical spare parts should go through a certification process and be under contract to mitigate unexpected lost production time and delayed deliveries. Some parts can only be purchased from a single supplier. If parts availability is limited to a single supplier, the question needs to be asked, “What is the financial status of this supplier?” If there is a possibility that the supplier could go out of business due to a stressed economic environment, the decision might be to buy what is available and hold the parts in inventory to mitigate that risk. If parts are obsolete or the manufacturer is no longer producing these specific parts, the decision might again be to purchase the available parts and hold them in inventory as a hedge against possible equipment failure.

Many parts in the average MRO inventory are designated as critical spares because at some point in time an equipment failure occurred and somebody was blamed for not having the part when it was needed. The average MRO inventory in the United States is between eight and 12 million dollars. If critical spare parts compose 80% of that dollar amount it is easy to see how important it is to have the correct critical spare parts in your inventory and to have the dollars invested in the correct parts that support an efficient investment of inventory dollars.